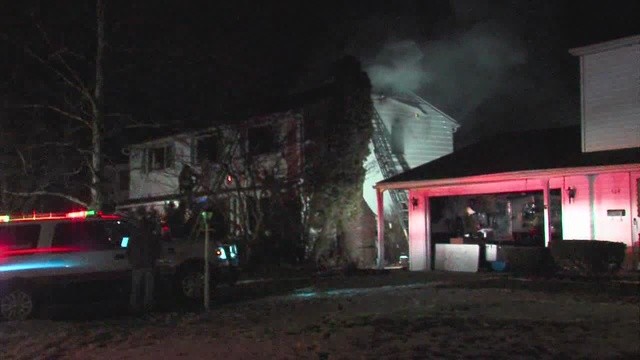 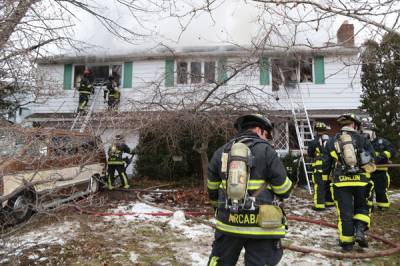 Approximately 1600 hours on January 18th the Elyria Ohio fire department was alerted to a house fire.  The initial dispatch was directed to an industrial area with a large warehouse structure and first arriving unit advised nothing showing. Updated dispatch information redirected the responding units to the correct address and also advised the responding chief of confirmed occupant trapped.  Dispatch also passed along information from the caller that the occupant was a “Hoarder”and they could see visible flames.

Engine 3 arrived on scene with smoke showing throughout the structure with the heaviest amounts seen from division 2. Engine 3 chose and offensive posture with 1 3/4 sized line for primary search and fire control. Ladder 7 advised heaviest fire division 2 side c while chief 3 instructed them to ventilate vertically.  Rescue 31 directed for occupant search and rescue. Supply line was established by engine 4.  An unknown unit advised chief 3 of an awning that is compromised by fire with “a lot of trash underneath it”.

Upon hearing that report Chief 3 ordered an emergency manpower recall.  Shortly thereafter Chief 3 was advised fire was extending to upper floors and roof.  A transitional attack was used after the discovery of fire extension the roof area.  Chief 3 then requests a MABAS box alarm assignment 1341 to respond and stand bye.  Second due company advised they were unavailable due to another assignment.  Chief 3 then advised the box would be sufficient without them and requested the fire prevention and training officer to the seen.

Shortly after that transmission unknown member advised the chief of fire on side C “coming through the vent hole”.  At the 20 minute mark Chief 3 described their operation as a “marginal offensive attack”having difficulty making entry and are unable to locate the victim.  Chief 3 a then advised of heavy fire in the awning area again.  Additional units began to respond from the call back.  At the 40 minute mark Chief 3 announced that they were going defensive due to the amount of stuff inside.

(The above information obtained from the command channel audio files. )

Initial alarm assignments chose and aggressive interior posture for search and fire control.  These crews were met with hoarding conditions with pathways as means of traveling between rooms.  There initial tactical objective was to search the upstairs of the home, where they believed the occupant was located.  What they found in the process of making entry to division 2 (the upstairs) is that it was full of belongings with no pathways.  Upon this realization the crews began to use VES procedures (vent, enter, search) to gain access to the rooms via outside windows.

During this process firefighters had to remove multiple tress to gain access to the windows. They chose the oriented search as ways of positive location management, due to the walls being unusable for orientation.

Firefighters also began to search on the first floor where one truck company captain described conditions changing from moderate to severe in a shorter than normal time period.  He also describe the stacks being so high at one point his “air pack was dragging the ceiling.”  With the combined efforts of fire control and search proving to be ineffective Chief 3 ordered all firefighters out of the building and into a defensive posture.

Once out of the structure Chief 3 requested an excavator to the scene for building demolition and to search for the occupant.  They were able to locate the victim, under debris, on the first floor. The victim had the house so full of belongings that she could no longer use the second floor and had retreated to the first floor for day to day living.

Overhaul and building demolition continued for hours and the aftermath is beyond words.

The fire that occurred in Elyria Ohio is a remarkable case study of success. While the occupant was not saved the operations used sound fire ground practices and aggressive procedures to contain the fire and preform a search.  Risk versus reward was constantly used and communication was affective during the entire operation.  One of the biggest learning points from this particular fire is the incident commander and his control over the fire scene.  By effectively communicating with the operational firefighters everyone understood their assignments, performed accordingly, and came home safe.  Very few suggestions for improvement are seen from the operational standpoint, but more towards having a common reporting system that can lead to affective pre fire planning.

Tags:
Hoarding training Hoarding hoarder fire fire training cluttered home
It must be the Air: The Importance of Air in Heavy...
Hoarding conditions made fire difficult to fight, ...